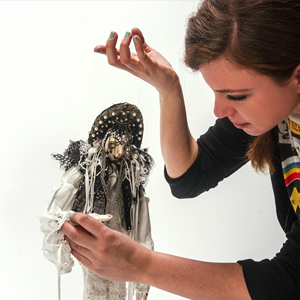 Modern need for constant communication, networking and information exchange has led to a rapid development of wearable technologies, wearable computers and intelligent fabrics.  These technologies can be used in different fields of medicine, war industry, cosmetics, sports, fashion, gaming, film etc. This paper focuses on wearable technology in the context of performance arts and analyzes in what ways technology affects contemporary arts.

Marija Tavčar was born 1982 in Belgrade, Serbia where she graduated in Fashion and Costume Design at the Academy of Fine Arts. In 2017 she completed a PhD Dissertation titled Interactive Costume: Body-Technology-Costume at the University of Arts in Belgrade. The aim of her dissertation was to define the term interactive costume and subsequently utilize it as a conceptual framework for the analyses of the entanglement between technology and contemporary art.